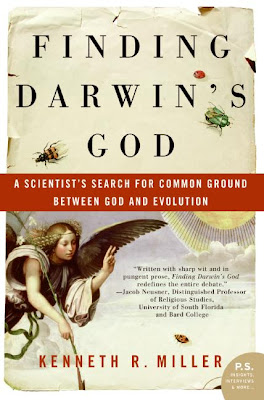 Science itself does not contradict the hypothesis of God. Rather, it gives us a window on a dynamic and creative universe that expands our appreciation of the Divine in ways that could not have been imagined in ages past.

As an outspoken defender of evolution, I am often challenged by those who assume that if science can demonstrate the natural origins of our species, which it surely has, then God should be abandoned. But the Deity they reject so easily is not the one I know. To be threatened by science, God would have to be nothing more than a placeholder for human ignorance. This is the God of the creationists, of the "intelligent design" movement, of those who seek their God in darkness. What we have not found and do not yet understand becomes their best - indeed their only - evidence for faith. As a Christian, I find the flow of this logic particularly depressing. Not only does it teach us to fear the acquisition of knowledge (which might at any time disprove belief), but it also suggests that God dwells only in the shadows of our understanding. I suggest that if God is real, we should be able to find him somewhere else - in the bright light of human knowledge, spiritual and scientific.

And what a light that is. Science places us in an extraordinary universe, a place where stars and even galaxies continue to be born, where matter itself comes alive, evolves, and rises to each new challenge of its richly changing environment. We live in a world literally bursting with creative evolutionary potential, and it is quite reasonable to ask why that is so. To a person of faith, the answer to that question is God.

The English poet Matthew Arnold, at the dawn of the modern era, once lamented that all he could hear of the "Sea of Faith" was its "melancholy, long, withdrawing roar." To some, that melancholy roar is a sound to be savored because faith is a delusion, an obstacle, a stumbling block on the road to progress and enlightenment. It is the antithesis of science.

In this view, God is an explanation for the weak, a way out for those who cannot face the terrible realities revealed by science. The courageous, the bold, the "brights" are those who face that reality and accept it without the comforting crutch of faith by declaring God to be obsolete.

But science itself employs a kind of faith, a faith all scientists share, whether they are religious in the conventional sense or not. Science is built upon a faith that the world is understandable, and that there is a logic to reality that the human mind can explore and comprehend. It also holds, as an article of scientific faith, that such exploration is worth the trouble, because knowledge is always to be preferred to ignorance.

The categorical mistake of the atheist is to assume that God is natural, and therefore within the realm of science to investigate and test. By making God an ordinary part of the natural world, and failing to find Him there, they conclude that He does not exist. But God is not and cannot be part of nature. God is the reason for nature, the explanation of why things are. He is the answer to existence, not part of existence itself.

There is great naiveté in the assumption that our presence in the universe is self-explanatory, and does not require an answer. Many who reject God imply that reasons for the existence of an orderly natural world are not to be sought. The laws of nature exist simply because they are, or because we find ourselves in one of countless "multiverses" in which ours happens to be hospitable to life. No need to ask why this should be so, or inquire as to the mechanism that generates so many worlds. The curiosity of the theist who embraces science is greater, not less, because he seeks an explanation that is deeper than science can provide, an explanation that includes science, but then seeks the ultimate reason why the logic of science should work so well. The hypothesis of God comes not from a rejection of science, but from a penetrating curiosity that asks why science is even possible, and why the laws of nature exist for us to discover.

It is true, of course, that organized religions do not point to a single, coherent view of the nature of God. But to reject God because of the admitted self-contradictions and logical failings of organized religion would be like rejecting physics because of the inherent contradictions of quantum theory and general relativity. Science, all of science, is necessarily incomplete - this is, in fact, the reason why so many of us find science to be such an invigorating and fulfilling calling. Why, then, should we be surprised that religion is incomplete and contradictory as well? We do not abandon science because our human efforts to approach the great truths of nature are occasionally hampered by error, greed, dishonesty, and even fraud. Why then should we declare faith a "delusion" because belief in God is subject to exactly the same failings?

Albert Einstein once wrote that "the eternal mystery of the world is its comprehensibility." Today, even as science moves ahead, that mystery remains. Is there a genuine place for faith in the world of science? Indeed there is. Far from standing in conflict with it, the hypothesis of God validates not only our faith in science, but our sheer delight at the gifts of knowledge, love, and life.

Posted by Heather Dawn Culpepper at 8:26 AM